The Early History of Lewisburg

After extensive research in the history of the Lewisburg area, combining genealogy records with historical accounts of who did what where and who owned what when, the following information has been compiled by Don Sharp.

In 1777, Paul Labyteaux and Samuel Ferguson first settled in the Lewisburg area. The two men were living in New York in 1776 when job opportunities opened up for skilled workers needed to work on military fortifications in Pensacola, FL. They went there under contract, and by the time the work was finished, the American Revolution had started, and they were unable to return to New York.

They and about two dozen other workers were told that if they decided to stay they would be given land grants along the Gulf Coast, until conditions were less dangerous to return to the Eastern seaboard.

"Grants were rapidly filling in the area with fleeing Loyalists," according to Donald Sharp, historian, "and Labyteaux and Ferguson decided to take their land grants on the Pontchartrain lakefront near Bayou Chinchuba." The land grant Paul Labyteaux acquired was the Ferris property (a British Land Grant) .

Over 40 grants were given from the Tchefuncte River over to Bayou Castin by 1777, with an estimated population of about 350 people in the area at the time. 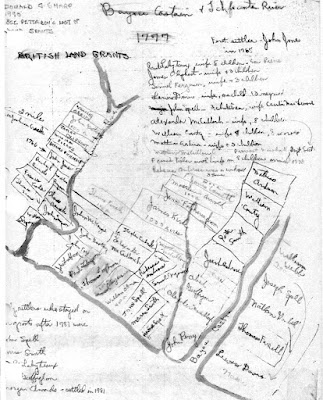 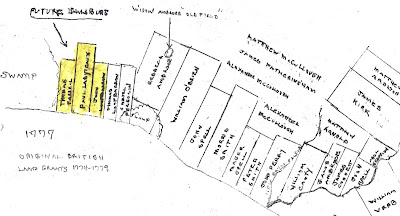 The settlers thought they were far enough from the war and would be safe. This proved to be wrong, as British and American forces soon fought on Lake Pontchartrain, and in October of 1779 British colonists at Mandeville were forced to sign an oath of allegiance to the United States.

Paul Labyteaux, Samuel Ferguson and  Rebecca Ambrose were at Bayou Chinchuba when the Peace Treaty of Paris was signed in September of 1783. They were among the half dozen or so other residents who chose to stay on the lakefront in the area of Bayou Castin.

In 1798, Peter Labyteaux, the son of Paul, petitioned for a Spanish land grant next to that belonging to his father. A grant of 114 arpents was given him by Spanish Governor Baron Carondelet.

Samuel Ferguson died about the same time as Labyteaux, and his land passed into the possession of his son Thomas Ferguson. He sold his father's property to William Dewees, a Justice of the Peace for the City of New Orleans. 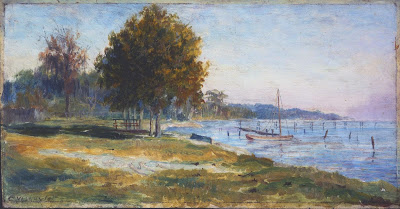 Painting of Lewisburg lakefront, 1899
Dewees received 428 acres in that transaction, and since he was not planning to live across the lake, he hired William McDermott, an American settler living in the area for some years, to be the "caretaker" for the newly-acquired property.

In 1813, shortly after joining the United States, Louisiana residents were told they had to petition Congress-appointed Land Commissioners if they had any "land claims" left over from the British or Spanish eras.

McDermott, although he had never filed for a land grant himself for some reason, did claim the land belonging to Deweesas as his own. Dewees, as Justice of the Peace, had seen this sort of thing before, so he filed a law suit and won, having McDermott removed from his land.

McDermott was not deterred, so he moved eastward and tried to claim the land on the adjacent Labyteaux/Ferguson tract as well as the Ambrose tract which had been abandoned.

In 1814 McDermott made a will before Judge James Tate, the St. Tammany parish judge, saying he wanted to leave his 400 acre plantation to his wife Mary and his children Wiliam Jr. and Clara Eliza. "His land, which he claimed, was bordered on the east by Jacob Bartle and on the west by land of William Dewees, known as the land of Paul Labyteaux and on the north by Samuel Loyd and Thomas Spell," Donald Sharp wrote in his research notes.

After the legal issues were resolved, in 1818 William Dewees sold to Sailing Master Jonathan Harris the Labyteaux/Ferguson tract for $3000.

A year later, in 1819, Haden Edwards bought the old Paul Labyteaux land grant at Bayou Chinchuba for $9,000 from Ferris, the price of which was "highly overinflated" but Haden was anxious to get his family of of disease-ridden New Orleans.

Unfortunately, Haden stopped making payments on the property a few years later after he left for Mexico City. His family had to move to Madisonville as a result. 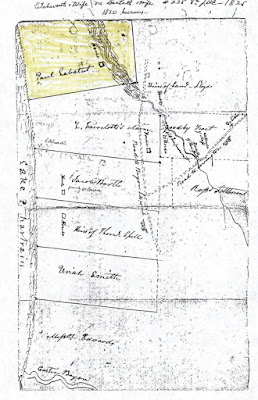 The Bayou Chinchuba property was returned to Jonathan Ferris. It was then acquired by William Weeks, and after changing hands a few more times, it wound up owned by James Amour and Christian A. Dorbett, who sold it to Hugh Gordon on February 20, 1827. At that time the 980 acre tract was known as "Paradise," according to documents found by Don Sharp. 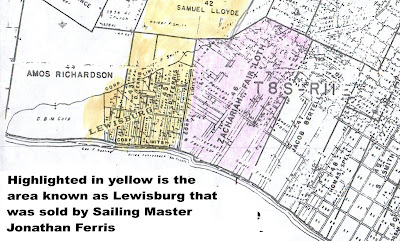 It was sold in 1829 by Hugh Gordon to Judge Joshua Lewis. Gordon was a notary in New Orleans and may have been a clerk in the Superior Court system who may have known Judge Lewis through that connection.

Judge Joshua Lewis (1772 - 1833) was a descendant of John Lewis who came from Ireland to America in 1720. Judge Lewis was the nephew of Meriwether Lewis, the famous American explorer who led the Lewis and Clark expedition across the continent between 1804 and 1805. 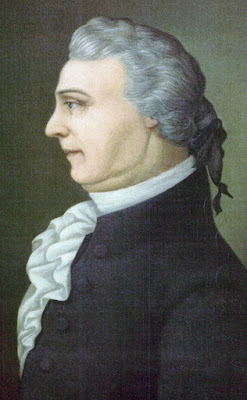 Judge Lewis served under Andrew Jackson in the War 1812, as did several others in the area.

Judge Lewis married America Lawson, who was the daughter of General Robert and Sarah Merriwether Lewis.  They first settled with their children near Lexington, KY, in 1798.

Joshua Lewis was elected to the Kentucky House of Representatives in 1799, 1803, and 1804.  A year later, in 1805, Lewis was sent to New Orleans by President Thomas Jefferson to help clear land title issues following the Louisiana purchase, according to Wikipedia.

He and his family traveled from Kentucky to New Orleans via a keelboat on the Mississippi River.

After his first year in New Orleans, in 1806,  he was appointed a judge of the Superior Court of the Territory of Orleans and, following Louisiana's becoming a state in 1812, he served with the 1st Judicial District Court.

In 1815 he ran for Governor, but lost the election to Jacques Villere.

What first attracted Judge Joshua Lewis to buy land on the north shore of Lake Pontchartrain for his retirement home in 1829? Sharp feels the main reason was to get away from the pestilence and disease of New Orleans. When he retired around 1829, he sought out the healthier conditions on the north shore for he and his wife.

He had first made his home in New Orleans in 1806, but over the years other acquaintances of his from Kentucky also came to the Crescent City for opportunities for financial gain. Among them were Haden Edwards who came in 1815 and who was the first to make the move to the north shore of Lake Pontchartrain in 1818.

Among the ways in which Judge Joshua Lewis may have gained knowledge of the desireability of living on the north shore was the fact that he had tried several cases in his court that involved land on the north shore.

"Also, there were several lawyers who either lived there or who had connections to the Tchefuncte River or Bayou Castine," said Donald Sharp.

One of those lawyers, a gentleman who had also come from Kentucky, was Joseph H. Hawkins. A resident of Madisonville, Hawkins would enter into a business partnership in 1821 with Stephen F. Austin, who would later become known as "the father of Texas."

Hawkins and Austin worked together to drum up interest, and actually make arrangements for the first colony of American settlers to set up homes in Texas. Hawkins died in 1823 from contracting yellow fever.

Three years later, Judge Joshua Lewis died on June 20, 1833. Following his death, the tract that he owned was named "Lewisburg" by his heirs in his honor. They then had the land surveyed, divided into lots, and sold. (See map.) 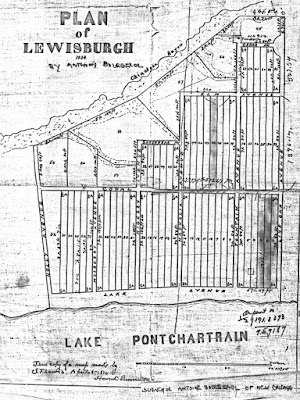 One of Judge Lewis' daughters married celebrated journalist Peter Knight Wagner, and one of his sons was a New Orleans sheriff, State Senator, and Mayor of the Crescent City.

Born in Lexington, KY, on March 26, 1800, John Lawson Lewis, a son of Judge Joshua Lewis, was elected sheriff of the Parish of Orleans in 1845 and later served as a member of the State Senate before he won election as mayor of the City of New Orleans April 10, 1854. 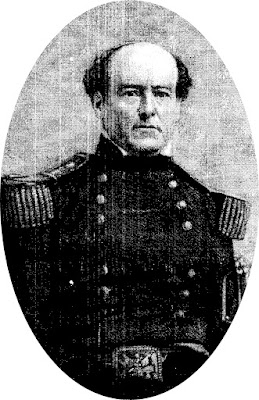 He married Henriette Baham, daughter of Melanie Foucheer and Renez Baham on March 22, 1842, in New Orleans. Henriette was the first cousin of Henriette DeLillie, foundress of the Sisters of the Holy Family.

John was instrumental in having the statue of Andrew Jackson placed in the Place d'Armes (Jackson Square), and he also figured prominently in the placement of the statue of Henry Clay on Canal Street in April of 1856. John died on May 15, 1886.