Over the past 60 years Don Sharp has written a number of articles focusing on the history of southeast Louisiana and Gulf Coast, particularly the Madisonville, LA, area and the "Tchefuncte River Corridor."

His most extensive publication, written with co-author Anita R. Campeau, was a book entitled, "The History of Mandeville," a 360-page overview of the Mandeville area from the American Revolution to Bernard de Marigny de Mandeville. 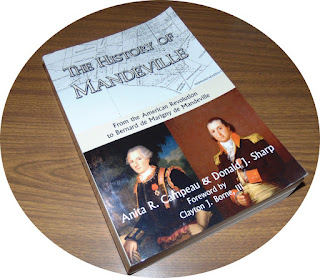 That book, available from Amazon, features chapter titles such as "The English Colonial Period," "The Revolutionary War Upheaval in British West Florida," and "The Battle of Lake Pontchartrain."

A reviewer on Amazon said this about the book:

This is a thoroughly and meticulously researched and well-written work, deserving to be on the shelf of anyone with either a general interest in Louisiana, and more particularly, the "north shore" of Lake Pontchartrain, or with specific scholarly interests in the land grants from British, Spanish and territorial American administrations.

The book richly describes French influences of the urban center of New Orleans and those prosperous enough to envision having a retreat from the epidemics of yellow and scarlet fevers, as well as cholera and other illnesses which afflicted the urban environment. Over time the area became accessible as a playground and respite for those of more moderate means.

Researcher Donald J. Sharp's interest in the "Tchefuncte Corridor" brings to life the varied families, black, white and mixed, who populated, defended and developed the area. Author Anita R. Campeau uses for her work platform a particular case record, Court Case No. 225, which, with some serendipity, Sharp was able to uncover, through the assistance and diligence and passion of Bertha Perreand Neff, late archivist of the St. Tammany Parish Clerk of Court, and the two strong-willed women who contested age-old titles to inherited and purchased property.

This contribution of Sharp and Campeau to the literature stands as rich testimony to the importance and untiring efforts of archivists, particularly the clerks of court throughout Louisiana, and in this case, gives appropriate commendation to Clerk of Court Malise Prieto and archivist Robin Leckbee Perkins.

The book is organized somewhat as a series of fully footnoted vignettes of personal histories of the families in the area, and in its approach, brings to mind a similarly formatted scholarly work, "Interim Appointment, W.C.C. Claiborne Letter Book, 1804-1805, edited by Jared William Bradley,"  Interim Appointment: W. C. C. Claiborne Letter Book, 1804-1805 (The Louisiana Purchase Collection) with its rich biographies and narratives of the interwoven lives, conflicts and contexts of Louisiana's transitional elite who guided the polity from Spanish and French colonial regimes, through U.S. territorial status and eventual statehood.

At 359 pages, including bibliography and source material, the book deserves a second look by anyone interested in the complex history of Spanish land claims in what was then "West Florida," or with an interest specifically in the early history of what once was a 'bedroom' community of New Orleans but now stands on its own footing as an economic center in its own right.