The History of Donald J. Sharp

Donald Joseph Sharp was born August 12, 1929, in New Orleans, the son of Clarence Sharp and Bessie Marie Scioneaux. Clarence was the son of Edmond Sharp and grandson of Marshall Sharp of Mandeville, Louisiana. 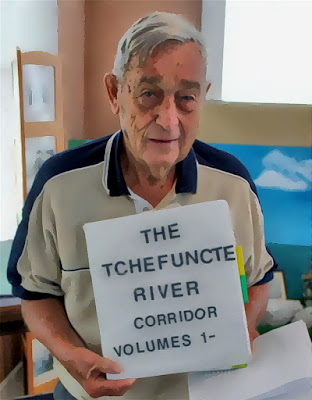 Donald J. Sharp with the first of 30 volumes of history research

Donald spent most of his early years in Metairie, Louisiana. He attended elementary school in New Orleans and graduated from Samuel J. Peters High school in 1946. He enlisted in the United States Army and was on occupational duty in Japan from 1946 through 1948.

While in Japan he visited Nagasaki and was there a year and a half after the atomic bomb was dropped. The devastation was difficult to describe. He was lucky to see General Douglas MacArthur when on leave in Tokyo passing through the hall of the Dai Ichi building.

After being discharged in 1948 he entered Colorado State College at Greeley and spent the
next four years learning to become a teacher. He taught over the next forty-six years in Idaho, California, Spain, Germany and Louisiana During this time he attended Loyola University in New Orleans (during the summers) Pepperdine College, U. C. L. A,, and Los Angeles State in Los Angeles.

He received a Masters Degree in Administration from Loyola in 1958 and continued post graduate studies for several years.

While teaching in Europe for two years, he took the opportunity to travel extensively. From southern Spain to northern Norway, from England to Moscow Russia he saw as much Europe as he could. He traveled to Russia by bus, during the height of the "Cold War" visiting such cities as Prague and Warsaw, and Kiev.

In 1959 he went to a bullfight in Madrid, Spain, and he sat a couple of rows back from the famous writer Ernest Hemingway.

He had the opportunity to enjoy the ballet Swan Lake while sitting in Communist leader Kruchshev's box. He drove down to Rome at Christmas time and saw Pope John XXIII in a Christmas Mass and was lucky to attend a "private audience."

After Europe he returned to Louisiana where he would teach, counsel and as an administrator for the next thirty-three years. He retired from teaching in 1997. He is married to Kathleen Duczer of Springfield, and they have three teen age children Donald II, Amy, and Jeremy.

He has always had a love of history and selected it as a minor. He has taught it many times over his career. A turning point occurred around 1960 when his father Clarence kept showing him the old family Sharp Bible and asking questions. After a couple of summers of putting off his Father's questions he decided to look into the history of his family. The trail led to St. Tammany Parish with stops at the Mandeville lakefront and the Covington Court House.

Three things kept him going all those years in research: first, the love of history and uncovering the unknown: second, the interesting and helpful people that he met along the way, and thirdly, finding out about one's self and who were the family ancestors.

It started out as a researching the family tree and quickly turned to the history of the area. Genealogy, by itself, to him was dry. It has to be mixed with the history that is occurring at the time.

Most of the people he first encountered in starting the research are no longer with us. It is almost impossible to name them all. A few that deserve mentioning are lawyer Adrian Schwartz; Mrs. Amos Neff, down in the basement of the Covington courthouse; Mrs. Norma Core, upstairs abstracting records for lawyers upstairs; cousin Edgar Sharp, known as the "Old Pelican" and historian of Mandeville; and Dr. Harvey Colvin and his wife Melba on the lakefront. The ones who have died need not be forgotten as he has them on voice cassette tapes telling their interesting stories. 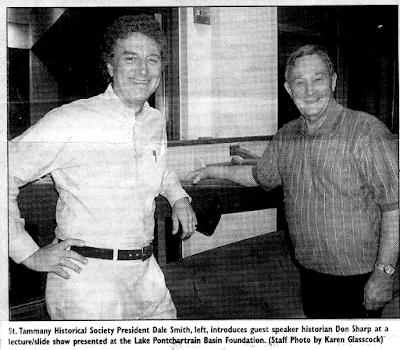 Don Sharp, at right, with Dale Smith, president of the St. Tammany Historical Society in 2002.


Beginnings of the Historical Society

It was about 1970 that Donald met the Colvins at their lakefront home. Edgar Sharp had suggested that he pay them a visit as they were doing research on early ships on Lake Pontchartrain. It was a visit to the Colvin's house that the idea to start a St. Tammany Historical Society first originated.

The time had arrived and the Society was founded. The first meeting had Dr. Harvey Colvin and wife Melba, Mrs. Amos Neff, Father Dominic Braud and Donald Sharp. One of Donald cs fondest memories was to receive the first membership card to be issued.

The history of the Society and its accomplishments are well documented. Many people of the Parish, contributed their talents and own resources over the years for the Society to grow and be successful. May it continue for a long time!

Over the years Donald has researched many topics concerning the history of St. Tammany. It started out by him working on the genealogy of his family tree but he soon found out, to his taste, that genealogy by itself can be dry, It is with a mixture of history and genealogy that family history can come alive and interesting.

From his family tree Donald branch out researching a variety of areas in parish history. In 2002, he spoke to the historical society about the United Stares Navy Yard at New Orleans and the Tchefuncte, 1804 - 1826.

His current interest is the genealogy and history of his mother's side of the family which are French Canadians. They were voyageurs and fur traders who worked their way down the Mississippi River after starting in Canada fighting the Iroquois in 1680.

His direct ancestor Louis Scioneaux was married in the Church of St. Louis at New Orleans in 1736 to a young lady who was in the orphanage of the Ursurline Sisters. Her father was a Lieutenant in the 'Troops de la Marines" and killed on the Missouri River in 1727 by the hostile Fox Indians.

It has been a labor of love for Donald these last fifty plus years researching his family history and the history of St. Tammany Parish. 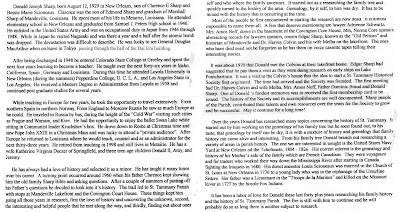 Click on above image to make it more readable.