On June 12, 1921, the New Orleans Item newspaper ran an extensive article on plans to improve the Mandeville harbor and lakefront. A copy of the article was found in the history research files of Don Sharp. Here is the text from that article:

A sleepy, dreamy, little, typically-Southern town on the shores of Lake Pontchartrain, some 22 miles from New Orleans; a town where the "folks" thought more of the traditions of their Spanish and French forefathers who first settled there than of progress and improvements; a town where great moss covered oaks sheltered wide, dusty streets, and where wonderful natural advantages were never brought to commercial use.

That was the Mandeville of yesterday. But now --

It's a lively, bustling town where the people are digging deep into their pockets to pay for improvements; where within a few short months the great work of dredging out the Bayou Castaign and  basin for big passenger ships, repairing the streets, mending the gap in the long sea-wall, will begin; where all the talk is of the future and of the three factories that are soon to be built. 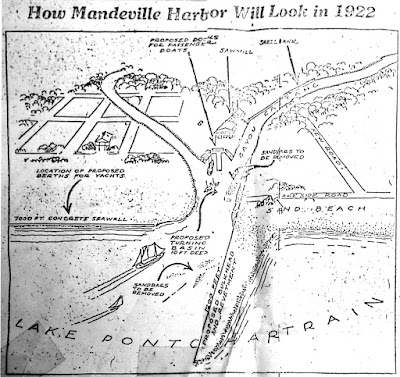 Plans furnished by Mr. Reine, who will donate property for three factories, and a street. Bond issue money will be spent to build docks and dredge the channel. Click on the map to make it larger.

A great change has come over the little town of Mandeville in St. Tammany Parish. There are new city officials, headed by Mayor Dr. W. E. Van Zant. Bond issues, one a municipal issue of $32,000 to repair the streets and the sea-wall, and the other, a ward issue of $25,000 to dredge the Bayou and the basin and building the new docks, have been voted.

People Are In Earnest

The people in Mandeville are in earnest, there's no doubt about that. There's a great deal of joking and laughter and banter about the new improvements, but beneath the surface there is strength of the new belief that money must be spent to bring to the city the prosperity and growth it deserves. An indication of the popular feeling may be obtained when it is noted that there was but one dissenting vote in the issuing of the bonds. Every other person in the city and ward who voted was in favor of it.

It means a whole lot that dredging of the Bayou Castaign. It means there will be a large and safe shelter for ships and barges, that the passenger boats from New Orleans will have the right kind of docking facilities, that new factories will spring up, new workmen will come and new homes will be built.

It means progress, nothing else. And the people of the little city, now fully awake to all they've been letting slip by them during the past, are putting "shoulders to the wheel" in their whole-hearted fight to make it all a great big success.

Way back in 1739, the first settlers crossed Lake Pontchartrain moored their boats up Bayou Castaign and settled on the site of what is now Mandeville. The Edwards, Morgans, Spells, and Tournieres were the first to come and they made friends with the Choctaw Indians. There never was much Indian trouble about that country.

The descendants of those first pioneers are residents of Mandeville. The names that are famous in the history of the little city are heard on every side. In 1797 came two other families, and in 1834 Marquis Bernard DeMarigny and his band came. The Marquis, owner of vast tracts of land mapped out the little city and began calling it Mandeville."

The newspaper article explained that with the bond issue money, the bayou would be deepened to ten feet. "A basin for ships to turn in will be dredged. A small sea wall will be built. A new dock with sheds for the protection of both passengers and freight will be built.

The bonds according to the law, cannot be offered for sale until 60 days after the election, which was held on May 25, 1921. At that time, as many as possible will be sold to the citizens of Mandeville and an attempt will be made to have merchants in New Orleans invest in the remainder.

There is one thing the people of Mandeville are jealous of and that is the reputation their city has as a health resort. Stories are told, and in many instances by interested persons themselves, of almost miraculous recoveries from sickness.

But about the best argument of all is the statement of Dr. Van Zant, the mayor: "Mandeville is too doggone healthy for a doctor."

Great forests of pine stretch for miles back of the city. The visitors who flock there during both the summer and winter seasons are the ones who "hike" up through the trees.

The cooling breezes from the lake keep them comfortable through the hot summer days. Then there is the fishing. Red snappers, red fish, trout, croakers, shrimp and soft shell crab abound in the waters of the lake. In the winter there is hunting, principally for wild ducks and geese, quail and partridge.

Every weekend hundreds of New Orleanians visit Mandeville. The Pleasure Bay, one of the largest passenger boats on Lake Pontchartrain, will shortly begin to make the trips from West End to Mandeville. Railroads run excursion trains every Sunday. The coaches that left New Orleans last Sunday were filled with typical picnic throngs - there were old folks and the young couples, and the swimming set and lunch baskets and all of the other things considered necessary.

It's really a mystery where all of the people go when they leave the train in Mandeville. They just seems to disappear. Some go right down to the lake and follow its winding shoreline out for a mile or so, probably to their own favorite fishing ground. Others head into the forests to spend the day beneath the great sheltering trees. Many have their own picnic grounds, hidden away in the trees.

And then "Lover's Lane." It's a long, long trail through the woods winding along over the little creeks and diminutive ravines, past the immense trees and back from the lake into the very heart of the forest. It's popular... but not too popular, Y'understand?

Mandeville heartily welcomes the visitors. Right now plans are being made to offer the excursionists better accommodations. There is talk of clearing out more spaces beneath the trees and building little benches and tables; of improving the beach for swimming and erecting more bath houses and probably opening a large dancing pavilion.

In the summer the population of Mandeville is some 600 to 800 greater. There are scores of houses for rent every year and visitors from all over the country go there to spend the season.

The main industry of the little city is the Poitevent and Favre sawmill where over 250 men are employed. There the yellow pine, brought down from the forests about 9 to 10 miles back of the city, is cut into timber.

The Chinchuba Deaf Mute Institute, operated by the Sisters of Notre Dame, is on the outskirts of the town.

On the lake shore is the great house called "Rest-A-While," a summer home for Orleans people operated by the King's Daughters. All during the summer months different groups come there to stay for the two-week vacation.

This year the high school will be opened in the new school building. This building, recently inspected by state officials, was declared to be one of the best in the state, especially as regards athletic equipment. H. H. Levy, of the parish school board, was one of the strongest workers for the erection of the new building.

The Public School League, an organization of mothers, is the leading club of Mandeville and is active in all school matters.

Then there is also the Mandeville Progressive Association, the chief civic organization. Dr. Van Zant is president.

Two of the strongest workers for the street improvements are Jules Bagur, retired, former proprietor of a New Orleans store, and Paul Esquinance.

Many of the more important plans for the dredging of the bayou were made by George E. Reine, the owner of much of the land on the west side of the bayou. Some time ago, Mr. Reine succeeded in having sent to Mandeville government engineers, who were to report on the government opening the mouth of the bayou.

This work was not done, it is said, because the government officials refused to O.K. the expenditure unless factories were built before the bayou was opened. This could not be accomplished, so the work was stopped.

Mr. Reine declared he has already entered into negotiations with the men who will erect the woodle handle and the canning factory and the saw mill. He has promised to donate sites for these factories and also to give to the city the property for a new street to border the bayou.

Reports have been current that the Southern Yacht Club will build a "stop station" at Mandeville after the bayou is opened. The ground for this house will also be donated, it is reported.

Some distance up the Bayou there is a natural basin, where the yachts could easily turn around. It is reported to have the "stop station" there.

The Mandeville Yacht Club, which has disbanded some years ago, will be re-organized, said Mr. Reine, when the bayou is re-opened. In years gone by there were great yacht races there and the people of the city are anxious to have them again.

Here are the names of the new city officials:

The committee named by the city to have charge of the work of arranging for the $32,000 bond issue includes the following: H. H. Levy, A. Dupre, Charles A. David, D. J. Mulligan and George Glockner.

The city is progressing. There is a forward spirit, there is cooperation between all classes, with a noticeable lack of "bickering" between the various elements. That the city is bound to grow and that the "neighbors" across the lake - the Orleanians - are going to be mighty proud of Mandeville in time to come.