Additional information about the Krebs family which owned land at the mouth of the Tchefuncte River has been found by Don Sharp, based on research by Anita R. Campeau, M.A., his co-author of the history of Mandeville.

Marianne Chauvin was the second wife of Hugo Krebs of Pascagoula, MS. He died in New Orleans in 1776 and Marianne obtained a Spanish land grant on the east bank of the mouth of the Tchefuncte River. Her son Basil obtained the land at the mouth of the west side in 1795 and was surveyed by David Bannister Morgan in the year 1804.

According to Sharp's research, Basil may have established some sort of a lighthouse at the location in 1811. He died in 1815.

Basil married Felicite Marchand in 1799 and she plays an important part in the entrance to the Tchefuncte River corridor, especially the cemetery at Madisonville. She purchased from her brother in 1829 the 13 acres that the cemetery is located on.

Here is the story of the Chauvin Family of Illinois and Louisiana. It explains how Marianne Chauvin, widow of Hugo Krebs, born in Illinois, got down to Louisiana and had two land grants on the Tchefuncte River. It was amazing that she built a house on the sandy bend at the mouth of the river.

The Chauvin Families of Louisiana and the Illinois Country 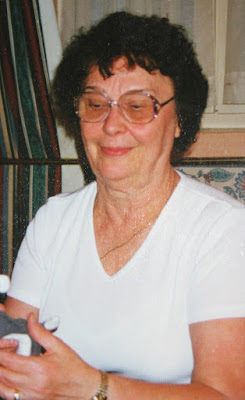 Objective: To find out how Marie Anne Chauvin dit Joyeuse, daughter of Philippe Chauvin dit Joyeuse and Marie-Anne Danis, born in Kaskaskia circa 1735, ties in with the Chauvin families of Canada, Mobile and Louisiana. She was present in New Orleans at the time of her mother's death on June 10, 1747. She married Hugo Ernest Krebs, widower of Marie Simon Lapointe about 1753. Her first child named Daniel Hugo Krebs was born on December 23, 1754, Mobile, Alabama, and died November 7, 1800, Pascagoula, MS.

The common ancestor for the CHAUVIN families who settled at Mobile, the Illinois country, and Louisiana is Pierre dit "Le Grand Pierre" who arrived in Montreal with La Grande Recrue in 1653 1 Pierre, the son of René and Catherine AVARD, originated from St. Vion, diocese of Angers, Anjou, France a department of La Flèche where he was hired on April 4, 1653 (Notary: Lafousse) as a miller and settler at the annual salary of 75 livres.

After completing his five-year contract, Pierre decided to remain in this country. Shortly afterwards, he signed a marriage contract with Marthe AUTREUIL/Hautreux, daughter of René and Francoise LA CHAUNERLIN, at Ville-Marie, (Basset: not. 15 September 1658), and was married the next day. The family settled at Varennes where they raised their large family.

One by one with the children leaving the paternal home, in order to relocate to Mobile, Louisiana, or the Illinois country, the couple removed to Montreal. Pierre CHAUVIN was buried in Montreal on August 4, 1699 and his widow, in compliance with the other children became the ward of her son Gilles CHAUVIN (Adhémar: not. September 30, 1700). Marthe AUTREUIL was buried February 25, 1714, at St. Francois, Ile-Jésus.

Gilles CHAUVIN, of the first generation born in Canada, was the son of Pierre and Marthe Autreuil. He was born in Montreal on June 1, 1668. In a contract dated July 30, 1688, Gilles was hired by Ignace Hébert; and on August 19, 1692, he was hired by Joseph Guillet de Bellefeuille.

Gilles was an engageur with Laurent Renaud in a contract dated July 27, 1703, when an engagement was signed by Pierre Richard, Louis Chauvin, Louis Vaudry, Charles Cabazié and Louis Renaud to make a voyage to the Illinois country. Gilles also came to Detroit in a contract dated June 7, 1706, in partnership with Louis Normand. (Adhémar : not.).

Gilles CHAUVIN married first Marie-Madeleine CABASSIER or Cabazier, daughter of Pierre and Jeanne GUIBERGE, January 21, 1697, Montreal (Adhémar: ct. 19). Two children were issued from this marriage: Pierre born in Montreal in 1698, hired west on July 1, 1698; died 28 November 1718, Montreal; and Louise-Danielle born in 1699, Montreal, married Nicolas PERTHUIS in 1721. Marie Cabazier died on August 8, 1699, and was buried the next day in Montreal.

Gilles has a second marriage to Angelique Guyon du Rouvray which took place on November 24, 1700, Montreal (Adhémar: ct. 24). The daughter of Michel and Genevieve Marsolet, she was baptized at Quebec on August 26, 1685. Twelve children were issued from this marriage but my interest is mainly on Louis-Marie, the eldest son, the fourth child named Philippe, born and baptized July 4, 1707, Montreal, and Joseph the seventh child.

Gilles Chauvin and his wife Angélique remained in Montreal, but the three sons mentioned above settled in Kaskaskia where they married and had children.

Chauvin brothers who settled at Mobile and Louisiana

Of the first generation born in Canada, several of Gilles' brothers settled in Louisiana. The three brothers Jacques, Joseph and Louis CHAUVIN were in Mobile mid 1709. Nicolas CHAUVIN dit La Fresnière, one of the eight sons of Pierre and Marthe Auteuil had actually been present in the colony before. He had served in Mobile as a Canadian during the years 1702-1706 along with the Canadian Joseph Simon dit Lapointe who later settled in Pascagoula, Louisiana. 2

Nicolas Chauvin dit La Fresniere was born January 19, 1676, Montreal; married Marguerite LeSueur the daughter of Pierre and Marguerite Messier in Louisiana. Her father was an interpreter of Indian languages and a fur merchant. Nicolas worked as an agent for Gabriel Baudreau dit Graveline and while in La Rochelle, France, he sought to have more merchandise sent to Louisiana to be sold at Mobile and Pensacola.

Joseph TURPIN, born in Montreal, June 21, 1696, the son of Pierre Alexandre and Marie Charlotte Beauvais married in New Orleans on November 7, 1731, Hypolite Chauvin, the illegitimate daughter of Nicolas de la Fresnière and an Indian slave named Catherine, a servant that he owned.

Being illegitimate, under Louisiana law, she was not eligible to inherit from her father's estate when he died in New Orleans about 1749. Joseph Turpin was in Kaskaskia Post, Illinois by 1742, as he received a grant of land that year, and another in 1743 from the French government. He died in the year of 1750, and his widow, who was expecting their second child, remarried in March, 1750, Kaskaskia, to Sieur Joseph de La Mirande, born 1728, Three Rivers, Quebec, son of Jacques and Marguerite Gertasse.

Hypolite CHAUVIN was born circa L715, probably at Mobile Post, and died about 1758, probably at the Opelousas Post, where Joseph La Mirande married his second wife that year.

1. Jacques CHAUVIN dit Mondon, born May 17, 1672, Montreal, was known also as sieur de Charleville. He and his brother Jacques accompanied sieur Lemoyne d'Iberville in the battle for the Hudson Bay. The capture of Fort Nelson in 1697 and their action on the Hayes River earned unending applause for it was a great feat perhaps unparalleled in the long history of Anglo-French naval warfare.. Jacques was associated with Fort Louis of La Mobile since 1698 as a merchant and private settler.

He married Marie-Anne de la Vigne circa 1714 at Mobile. He died and was buried about 1729 at Biloxi. He was a good friend of sieur Lemoyne de Bienville, founder of New Orleans in 1718, and though illiterate when he testified before d'Artaguiette he denied having any knowledge that could be detrimental to Bienville's reputation.

2. Joseph CHAU'VIN known as sieur de Léry, was born April 14, 1674, Montreal, and also settled in Mobile. He had a natural child with Francoise, a slave of Pierre Payan. He married Marie Hypolite MERCIER who came to Louisiana perhaps on the Pelican in 1704. She was the widow of Valentin Barreau, surgeon.

From her marriage to Joseph Chauvin, we know of Joseph and Nicolas. Hypolite was godmother to an Indian slave at Fort Louis on November 24, 1721, where her name appears for the last time. She returned to France where she died before spring 1726. No documents were found to explain her departure from Louisiana. 3

Lieutenant Joseph de Léry, son, was killed in an ambush by a group of Arkansas Indians, prior to February 21, 1738. He was replaced by Francois de Montbrun, a Canadian officer, who was wounded during Bienville's campaign against the Chickasaws, April-May 1736.

3.    Louis CHAUVIN, sieur de Beaulieu, was born February 17, 1678, Montreal. He was hired on May 27, 1701, to make the voyage in the first convoy that came to Detroit under Cadillac (Adhémar: not.). He was hired in July 1703 to make a voyage to the Illinois country in the company of Pierre Richard, Louis Vaudry, Charles Cabazié and Louis Renaud for Laurent RENAUD and Gilles CHAUVIN.

He was in Detroit with his brother Jean-Baptiste in 1706 and at Fort Louis de La Mobile in October 1709 when he was godfather to his nephew Joseph, son of Joseph Chauvin de Léry. With his brothers Nicolas and Joseph, he took part in the expedition of Louis Juchereau de Saint Denis to the Rio Grande.

The expedition left from Fort Louis on or about October 2, 1716, proceeded to Natchitoches on the Red River, and arrived at Rio Grande 4 in April 1717. Their merchandise was confiscated and St. Denis was taken prisoner to Mexico. The Canadians took refuge in the church of the San Bernardo Mission, and eventually were able to escape during the night, and arrived at Ile Dauphine on October 26, 1717. Jacques and Nicolas wrote a report of the expedition on June 30, 1718.5

He married Charlotte Aubanne (Orbanne) DUVAL, daughter of Francois Aubanne Duval and Elizabeth ALEXANDRE. He was given a concession of land in the region of Chapitoulas where he cultivated tobacco and was involved in the lumber industry with his two brothers. His plantation was one of the most prosperous in the colony. He died of pleurisy prior to 1729.

Périer and Chaise, Directors of the Indian Company, announced his death on January 30, 1729, stating that he was the best of the three brothers and that they were bereaved because it was he who was always aiming to please the company.6

Gayarré in his History of Louisiana, Volume 1, page 111, wrote that Louis Chauvin was killed on January 3, 1731 by Indians on the Mississippi while he served in the military for Governor Périer. This is a false assertion, since his widow Charlotte Duval married about 1729 the officer Jean-Charles Demouy, an aide-de-camp of Governor Bienville.

To view the entire article in a PDF format, CLICK HERE.
For more information about the Pascagoula, MS, Krebs heritage, CLICK HERE.