Donald J. Sharp named the focus of his historical research as the "Tchefuncte River Corridor," an area of intense interest due to its development and contributions through the past 200 years.

The Tchefuncte River corridor is approximately 12 miles in length, starting at the mouth of the Tchefuncte River at Lake Pontchartrain and running east, then northwest, with bending curves and a major branch with the Bogue Falaya River.

The towns along the Tchefuncte (and Bogue Falaya) include Madisonville, Lewisburg, Mandeville, and Covington. Another branch, the Abita River, goes towards the northeast all the way to Abita Springs.

Click on the map images to make them larger. 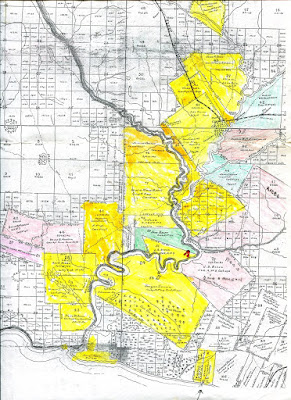 The Krebs Plantation land grants (No. 38, 40 and 41) started at the mouth of the river and extended northward on both sides of the river. The corridor ends up the Bogue Falaya River with the land grant of Jesse R. Jones (the site of a brickyard), which is land grant No. 45 on the Tobin Map shown.

The complete corridor came into existence in 1811 when Jacques Drieux acquired his property on the Bogue Falaya River. He sold it shortly thereafter to John Wharton Collins, who founded the town of Wharton. A few years later, the name of the town was changed by the state legislature to Covington. 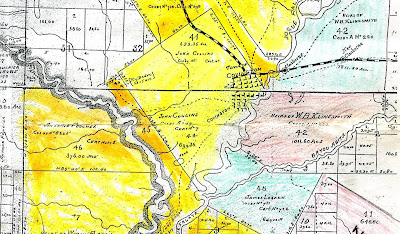 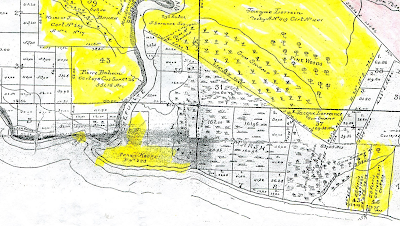 According to the TchefuncteRiver.com website, the river is 48 miles long, starting in Tangipahoa Parish and coming southward on an angle through a corner of Washington Parish and then into St. Tammany Parish. It ends when it flows into Lake Pontchartrain just west of Mandeville and a few miles south of Madisonville.

The river has been designated by the State of Louisiana as a "Natural and Scenic Waterway," and today it is popular for boating, fishing and water recreational sports.

"The Tchefuncte River was important waterway back in the 19th century," the website stated. "The lumber and other building materials from the rural and heavily wooded northshore of Lake Pontchartrain was shipped down the river, across Lake Pontchartrain, and on down to New Orleans where it was used for construction purposes on the south shore."

In 1795 Basil Krebs petitioned the Spanish authorities for a land grant on the west bank of the Tchefuncte River where it flowed into the lake. He was finally granted the property in 1804 after proper surveys had been done. Since his stepmother's family were well-known lighthouse builders at Mobile Bay, Alabama, it may have been his goal to build a lighthouse at the mouth of the Tchefuncte as well.

The Mobile Bay lighthouse was shown on a 1716 map of the area, and, if it was built just two or three years prior to the making of the map, that would have made it one of the first lighthouses built in America.

Back in Louisiana, in 1835, the river traffic on the Tchefuncte River had increased significantly (including the start of steamboat traffic), and as a result, a lighthouse was built at the mouth of the river in 1835. 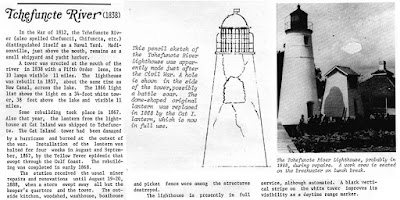