Admiral David Glascow Farragut of the United States Navy aided the Choctaws of St.   Tammany Parish during the period of military occupation of New Orleans. Adrien Rouquette had met Farragut on a trip up north years before* the War.   His nephew, James Rouquette (Dominique's eldest son)  had sailed with Farragut on a mission which took him around the world by sea.

Pere Rouquette,  after the burning of Buchuwa Village,  sent an urgent appeal to Admiral Farragut for permission to cross Lake Pontchartrain to bring much needed medicine, food and clothing to The Nook for his  suffering Indians. Farragut responded by sending a Federal gunboat up Bayou Lacombe to escort the Choctaw mis­sionary to New Orleans and back to Lacombe. 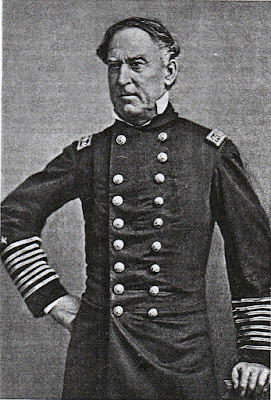 According to Wikipedia, Farragut was the first rear admiral, vice admiral, and admiral in the United States Navy. "He is remembered for his order at the Battle of Mobile Bay usually paraphrased as "Damn the torpedoes, full speed ahead" in U.S. Navy tradition."

"Born near Knoxville, Tennessee, Farragut was fostered by naval officer David Porter after the death of his mother. Despite his young age, Farragut served in the War of 1812 under the command of his adoptive father. He received his first command in 1824 and participated in anti-piracy operations in the Caribbean Sea. He served in the Mexican–American War under the command of Matthew C. Perry, participating in the blockade of Tuxpan. After the war, he oversaw the construction of the Mare Island Naval Shipyard, the first U.S. Navy base established on the Pacific Ocean."