A Cemetery For The Family

The Family Cemetery as told by Helen Hutchinson

During the advanced age of Alma Armstrong, she often related a story regarding our family cemetery at Chinchuba that originally was the burial place of the early Spell families, John and Thomas Spell Sr.,and their offspring, but in time it became the property of Anna Marshon Calliot.

Alma here relates when she was about eight or ten years of age, she and her mother (Serah) would drive the horse and carriage out to the cemetery at Chinchuba to put flowers on the graves of her parents(the Zach Sharps). In so doing they had to drive through the property of Mrs. Calliot who always invited them in to have coffee and honey sweeten cornbread.  Serah always accepted the invitation, feeling it would be an insult to refuse. This always pleased Alma who looked forward to the treat of honey sweet cornbread.

Anna Calliot was the owner of a herd of about a hundred head of brush goats that always caused Serah displeasure when she found them playing on the brick tombs in the cemetery that was not under fence. Serah realize the cemetery could easily be overlooked or destroyed in the tall pine timber without a fence as it were in its present condition.

One day while on a visit to Mrs.  Calliot she asked," Anna, how about selling me two acres of your land, with the cemetery as part of it? Mrs. Calliot seem to take time to dwell on the question, the land being worth only a few dollars when Serah volunteered, "I’ll give you a hundred dollars for two acres.”

A few days later the two acres was owned by the descendants of the two brothers John and Tom spell Sr., the Sharps, Spells and Strains, a family grave site. Serah asked for one stipulation, that the transaction be made for "one" dollar.  She did not want the public to know she was stupid enough to pay a hundred dollars for two acres of land!   Mrs. Calliot, too, may have suffered a feeling of guilt She insisted on adding a half acre to the sale making it the 2.6 acre cemetery we have today! 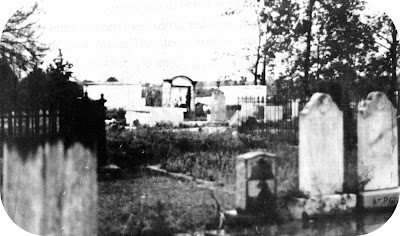 I heard this story many times through the years of my upbringing, related to me by both my aunt Alma and often by my grandma Serah Hutchinson!

Hugh Spell purchased a parcel of 40 acres of land from his uncle Hugh, who married Julia Waters Later sold a part of his land to Steven Marshan. Later on Hugh's death he purchased the remainings of his property and married Hugh's widow and raised one child, a daughter, who inherited their holdings- the Hugh Spell estate that contains our cemetery.  She, Anna Marshon Calliot, was the seller of the cemetery to Serah Sharp Hutchinson as you can read above!
at October 22, 2018